The Spirit, Bonhoeffer and Gunkel 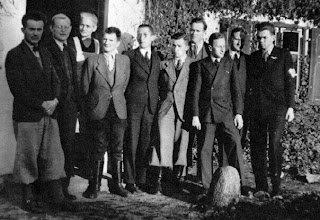 If it's the case, as I argued in my post The Spirit and inspiration in theological exegesis, that the human words of Scripture become a means of revelation by the operation of the Holy Spirit, what does that look like in practice? Childs attempted to answer this question in his fascinating article "Interpreting the Bible Amid Cultural Change," Theology Today 54 (1997), 200-211.
He turns to a major source of personal inspiration: the Germany theology of the Confessing Church during the 1920s and 30s. He notes that theologians of this period underwent a paradigm shift that brought them into fresh and empowering contact with God and his Gospel. Karl Barth, among others, talked of the strange new world of the Bible, a vision which empowered him to resist National Socialism “like an ancient Hebrew prophet.” (203) While he admits that cultural or political factors certainly contributed to this shift, such explanations do not get to the heart of the matter. Those involved in this new vision of the Bible spoke of responding to a powerful voice from Scripture itself, language echoing with older models exemplified by the church Fathers and the Reformers.

“The coercion of the biblical text occurred in different ways, often matching the unique personalities of each interpreter, but theirs was always a stance of reception. ... In every case, the Scriptures were the vehicle for the transformation of perspective.” (204)

In order to demonstrate this, Childs compares Hermann Gunkel’s interpretation of Genesis 1 with that of Bonhoeffer. Gunkel, inspired by German romanticism of the period, sought to instil in his readers an aesthetic appreciation for the creative genius of this ancient, primitive document. Bonhoeffer, on the other hand, saw in Gen. 1:1 an affirmation of the Gospel which plunges the reader into a new dimension of reality. He says the following:

“The Bible begins with God’s free affirmation, ... free revelation of himself. . . . In the beginning, out of freedom, out of nothing, God created the heavens and the earth. This is the comfort with which the Bible addresses us . . . who are anxious before the false void, the beginning without a beginning and the end without an end. It is the gospel, it is the resurrected Christ of whom one is speaking here. God is in the beginning and he will be in the end. . . . The fact that he lets us know this is mercy, grace, forgiveness and comfort.” (Creation and Fall: A Theological Interpretation of Genesis 1-3 (London: SCM, 1959), 11, 16.)

In awe Childs exclaims: “What a different vision from that of Gunkel! Were they even reading the same text?” At the heart of this paradigm shift

“was a new perception of the reality of God and a fresh grappling with the substance of the Bible as providing the true content of the Christian faith.” (206)

I've dealt with this Bonhoeffer quote elsewhere, in relation to the difficult question of whether non-believers can really "understand" the Bible.
Posted by Phil Sumpter at 14:16

I quite like Gunkel, though I must confess I have not tread a great deal of him.

Does Childs interract with Sigmund Mowinckel?

Childs liked Gunkel too. He thought he was a genius who had brought biblical studies into a new era. If anything, I think the roots of Childs' canonical approach lie in form criticism. His problem is that Gunkel stayed at a surface level which prohibited him from grasping the text's true subject matter.

Childs only cites Mowinkcel to back him up in various arguments. He doesn't engage with his approach per se. Mowinckel's approach simply falls unders the same category as Gunkel's.

Thanks for the reply.