An ancient theological exegesis of Psalm 24 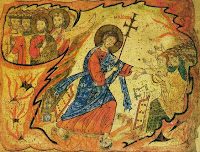 On April 19 the Eastern Orthodox Church celebrated The Day of the Resurrection and, much to my surprise, has as one of its liturgical texts an extract from the apocryphal Gospel of Nicodemus. This Gospel provides us with a description of events in Jesus' career which are hidden from sight in the four canonical gospels: the moment between his crucifixion and resurrection, and the moment after the ascension, between his envelopment by the clouds and his enthronement at the right hand of the Father.

So how did the author of this Gospel find out what happened? He read the Old Testament, of course! In this case, Psalm 24 proved to be the main source of information. As Gregory of Nyssa put it, Psalm 24 is a supplement to the Gospels, providing us with additional information not contained in the canonical Four. The tradition that Psalm 24 (LXX Psalm 23) is about two events in Jesus' career (the Harrowing of Hell and the Ascension, corresponding to the two sets of questions and answers in the third strophe of the psalm) is relatively later, however. Originally the entire was read in relation to the Ascension. I will wait until Ascention Day itself (this coming Thursday) before posting more on the history of interpretation of this Psalm. For now, I share with you the Harrowing of Hell, replete with citation from Psalm 24 (underlined), kindly provided for us by Esteban of Vox Stefani:

And as the prince Satan and Hades spoke this together, suddenly there came a voice as of thunder and a spiritual cry: "Lift up your gates, O ye princes, and be ye lifted up, O everlasting gates, and the King of glory shall come in." When Hades heard that, he said unto the prince Satan: "Depart from me and go out of mine abode: if thou be a mighty man of war, fight thou against the King of glory. But what hast thou to do with him?" And Hades cast Satan forth out of his dwelling. Then said Hades unto his wicked ministers: "Shut ye the hard gates of brass and put on them the bars of iron and withstand stoutly, lest we that hold captivity be taken captive."

But when all the multitude of the saints heard it, they spake with a loud voice of rebuking unto Hades: "Open thy gates, that the King of glory may come in." And David cried out, saying: "Did I not, when I was alive upon earth, prophesy unto you: 'Let them give thanks unto the Lord, even his mercies and his wonders unto the children of men: for he hath broken the gates of brass and smitten the bars of iron in sunder; he hath taken them out of the way of their iniquity.'" And thereafter in like manner Isaiah said: "Did not I, when I was alive upon earth, prophesy unto you: 'The dead shall arise, and they that are in the tombs shall rise again, and they that are in the earth shall rejoice, for the dew which cometh of the Lord is their deliverance?' And again I said: 'O Death, where is thy sting? O Hades, where is thy victory?'"

When they heard all these things from Isaiah, all the saints said unto Hades: "Open thy gates: now shalt thou be overcome and weak and without strength." And there came a great voice as of thunder, saying: "Lift up your gates, O princes, and be ye lifted up, O gates of Hades, and the King of glory shall come in." And when Hades saw that they so cried out twice, he said, as though he knew it not: "Who is the King of glory?" And David answered Hades and said: "The words of this cry do I know, for by his spirit I prophesied the same; and now I say unto thee that which I said before: 'The Lord strong and mighty, the Lord mighty in battle, he is the King of glory.' And: 'The Lord looked down from heaven that he might hear the groanings of them that are in fetters and deliver the children of them that have been slain.' And now, O thou most foul and stinking Hades, open thy gates, that the King of glory may come in." And as David spake thus unto Hades, the Lord of majesty appeared in the form of a man and lightened the eternal darkness and broke the bonds that could not be loosed: and the succour of his everlasting might visited us that sat in the deep darkness of our transgressions and in the shadow of death of our sins.

--From the apocryphal Gospel of Nicodemus

I wrote some comments on this on Estebans post.

Very cool post. In fact, if you listen to Handel's "Messiah" you'll notice he places Ps 24 in between the crucifixion and the ascension. I think most modern audiences have zero clue why.

A great article that deals with this (Ps 24, the 'Harrowing of Hell', etc) is Gary Anderson's essay titled,"The Resurrection of ADam and Eve" in "In Dominico Eloquio: In Lordly Eloquence: Essays on Patristic Exegesis in Honor of Robert Louis Wilken."

Hi Josh, thanks for the tips! That's very interesting. I will get hold of Gary Anderson's essay right away.

By the way, I just published a new post on the reception of Psalm 24 in the early church here: http://narrativeandontology.blogspot.com/.