Psalm 24 in early Christian exegesis (in commemoration of Ascension Day) 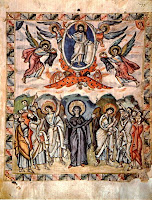 Yesterday was Ascension Day, and as promised in my post on Resurrection Day, I will here give an outline of the reception of a Psalm that has, traditionally, had a special place in this festival. My source is E. Kähler's excellent Studien zum Te Deum und zur Geschichte des 24 Psalmes in der Alten Kirche (Göttingen: Vandenhoek & Ruprecht, 1958).

The oldest undeniable reference to Psalm 24 (Kähler wonders whether it lies behind 1 Corinthians 2:8) is in the Apocalypse of Peter, in which Peter, during the Transfiguration and the appearance Moses and Elijah (Matt 17), asks Jesus where the other righteous are. As answer, he receives a vision of Paradise filled with believers. In this vision, the righteous—who are identified with the righteous of Ps 24:6— are kept in a kind of “pre-Heaven” as prisoners. A dramatic scene then enfolds, in which Jesus and the two prophets ascend first into this “First Heaven” and then take the righteous further upwards into the true Heaven, the Second Heaven, in order to consumate their salvation. This ascension creates “great fear and horror,” implying that some kind of celestial resistance needs to be overcome. This occurs with the calling out of Ps 24:7: “Open wide the Gates, you princes.”

Here is the relevant text, with allusion to Ps 24 underlined:

And behold, suddenly a voice came from Heaven and said: “This is my dear son, with whom I am pleased, and my commandments …” And an extremely large and sparkling white cloud came over our head and took up our Lord and Moses and Elijah. And I quaked and was horrified. And we looked upwards and Heaven opened up and we saw people in the flesh, and they came and greeted our Lord and Moses and Elijah and ascended into the Second Heaven. Then the word of scripture was fulfilled: “This generation seeks him and seeks the face of the God of Jacob.” And great fear and horror occurred in Heaven. The angels grouped together so that the word of Scripture would be fulfilled: “Open wide the Gates, you princes.” Following this, the Heaven which had been opened was closed again.”[*]

This understanding of the Psalm remained incredibly fruitful throughout the history of the early church, within all the major theological centres (Palestine, Alexandria, Carthage, South Gaul, Rome, Asia Minor). For the sake of space, I will simply list the main variations and emphases as found amongst the major theologians of these schools in this period:


[*] My translation, based on the German translation by E. Hennecke, Neutestamentliche Apokryphen (1924). Cited in Kähler, Te Deum, 54.

Thank you for investigating Ps. 24. I would like any bibliographical references from the fathers that you have cited here. Currently, I'm working on a project on the ascension of Jesus, and would like to refer to these.