Translation of ἁγιάσματος in the Psalms. 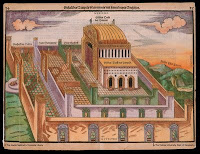 In Psalm 24:3 we have: מִי־יָקוּם בִּמְקוֹם קָדְשֹׁו, where קָדְשֹׁו is usually translated as an adjective: "who may stand in his holy place."

However, there is another LXX textual tradition, preferred by Pietersema in his NET translation, that has a nominal form: ἐν τόπῳ ἁγιάσματος αὐτοῦ.

What is the significance of these two varients?

Is ἁγιάσματος αὐτοῦ a Hebraism, simply translating the Hebrew nominal-construct form while still intending the word to have adjectival force (and thus the same meaning as Rahlfs' ἐν τόπῳ ἁγίῳ αὐτοῦ: his holy place)?

Or does it intend to express something different to the textual tradition found in Rahlfs' Septuaginta, i.e. "holiness" itself, creating the translation: "the place of his holiness"?

Another possibility is that ἁγίασμα refers to the "holy sanctuary," even the temple itself, rather than God's own concrete holiness. In this case, LXX Ps 23:3 should be translated as "the place of his sanctuary."

If we leave aside the possibility of a Hebraism, our choice between "holiness" and "sanctuary" can have interpretative implications. In LXX Psalm 77:54, for example, we have εἰς ὅριον ἁγιάσματος αὐτοῦ (for Hebrew אֶל־גְּבוּל קָדְשֹׁו in MT Psalm 78:54). In the Hebrew context, it is uncertain whether the mountain in the same verse refers to Zion, Sinai, or something else. The Hebrew simply means "to his holy territory," i.e. translating קדש as an adjective. What is LXX doing with its nominal form ἁγιάσματος? Is it maintaining the ambiguity (i.e. somewhere where God's holiness was present) or is it trying to clarify the referent (to Zion, the territory where his sanctuary is)? If the latter option is to be preferred, we have an example of ancient interpretation.

Another possibility is that rather than ἁγιάσματος being a matter of interpretation (here, clarification), it is just a matter of ancient grammar. Eliezer Berkovits in “The Concept of Holiness” [*] argues that קדש should always be translated as a noun. Perhaps one strand of ancient translation agreed with him. The difference still hasn't been resolved today: some translators MT go for an adjective: "in his holy place" (and thus agree with ἐν τόπῳ ἁγίῳ αὐτοῦ), whereas others (e.g. Seybold) go for a noun: "in his sanctuary" (=ἐν τόπῳ ἁγιάσματος αὐτοῦ).
Either way, it would seem that he debate is quite ancient!
This still leaves open the question of how to translate ἐν τόπῳ ἁγιάσματος αὐτοῦ. Does it mean "holiness" or "sanctuary." Both translations are possible (amongst others). Unfortunately, Pietersma's translation is not too helpful on this. He translates LXX Ps 77:54 as "the territory of his holy precinct," but LXX Ps 23:3 as the "place of his sanctity." What are his criteria?

So what do you think? How ought we translate ἁγιάσματος and what is the significance of its divergence from ἁγίῳ?
And am I an oddball for getting so bogged now in marginal
I should add that elsewhere, בִּמְקוֹם קָדְשֹׁו is translated as ἐν τόπῳ ἁγιάσματος αὐτοῦ (Ezra 9:8), where the reference is to the temple. Sirach 36:12 refers to Jersualem as ἐκλεκτὴ πόλις ἁγιάσματος, translated as "holy" by KJV and "sanctuary" by the REB. Again, confusion over the meaning of the term.
Update: In order to strengthen my desire to read ἁγιάσματος as refering to the sanctuary, rather than just holiness per se, J.K. Gayle has kindly pointed out that in 2 Chronicles 36:17 the Hebrew בְּבֵית מִקְדָּשָׁם , which literally means "the house of their sanctuary," is also translated with ἁγιάσματος in the LXX: ἐν οἴκῳ ἁγιάσματος αὐτοῦ (though why it's αὐτοῦ and not αὐτῶν) I'm not sure.
[*] Essential Essays on Judaism. D. Hazony, ed. Jerusalem: Shalem Press, 2002: 247-214. [Originally in his, Man and God; Studies in Biblical Theology, Detroit: Wayne State University Press, 1969].
Posted by Phil Sumpter at 16:55

Berkovits in “The Concept of Holiness” argues that קדש should always be translated as a noun.Fascinating post! Not sure your either /or interpretive question can be answered, not easily or ever definitively anyway.

Rahlf's LXX does have ἁγιάσματος in Ezra 9:8 for קדש (as you mention) but also ἐν οἴκῳ ἁγιάσματος αὐτοῦ in 2 Chronicles 36:17 for קדש.

Why does Matthew opt for ἐν τόπῳ ἁγίῳ (and not ἐν τόπῳ ἁγιάσματος) in MT 24:15 - an allusion to Daniel and not, seemingly, to the Psalms at all? What is his Greek reader to understand (ὁ ἀναγινώσκων νοείτω)?

Esteban Vázquez struggled with translating this some time back: http://voxstefani.blogspot.com/2007/08/on-translating-churchs-and-no-other.html

thanks for the tips! Not only was Esteban's post fascinating, but your tip on Chronicles was helpful too. The Hebrew doesn't have קדש, it has מִקְדָּשׁ , which literally means "sanctuary," thus strengthing my hunch.

Does Daniel have agiasmatos in the reference? I couldn't find what Mt was referring to.