Translating a yiqtol verb in Ps 24:2 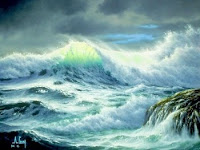 John Hobbins of the informative blog Ancient Hebrew Poetry has kindly responded to my suggestion to translate the yiqtol verb יְכוֹנְנֶהָ (underlined) in Ps 24:2 as follows:

I've chosen the "-ing form" (gerundive). For my justification of why, go here.

His own suggestion is as follows:

he founded it on the seas,
he establishes it on the rivers.

Rather than the -ing form, John opts for what is called the "historical present" Here's his explication:

Something that took placed in the past is *narrated* as if it was taking place in the present. We associate tense switching of this kind with an oral register. "I went over to my Mom's house. Then she says to me, " . . ." (see the comments thread for the full dialogue).

I'd like to suggest that, as far as their effect is concerned, the two translations are not that far off. They are an improvement on the "past-simple" translation found in all our English Bibles ("established") as well as in Gesenius' "past -continous" (§107.1a: "was being [continuously] established").

John opts for the "historical present," which is one use of the so-called "present simple." In his awesome book The English Verb, Michael Lewis tries to uncover the basic semantic distinction of this form of the verb form. Lewis prefers to call it "the first form" (as opposed to the "second form," the so-called "past-simple") because ultimately these two forms are not about time at all. Lewis summarises the basic semantic content of this form as follows, concluding with a reference to John's "historical present":

Paradoxically, not only is the present simple not about Present Time, but it is not about time at all. This is a characteristic which it shares with "the past simple." Each of these forms is "simple" in the sense that the speaker sees the events described as single, simple entities, unities, totalities. The "present simple" and "past simple" contrast with each other in that in the first the speaker sees the event as immediate, and with the "past simple" the event is seen as remote. These are not essentially temporal concepts. What matters, for all uses of the simple tense forms, is that the speaker, at the moment of speaking conceptualises the action described as total, complete. As so often ..., we find that a relatively unusual use of a form helps make this clear. In a sequence of correspondence in the newspaper, it would be natural to write:

... In the correspondence column, misses conceptualises C.B. Stewart's letter as a whole, and clearly wishes to reply to it. ... misses clearly refers to an event in Past Time. ... The essential characteristics of an event described by a "present simple" verb form are:

Key here is that the "first form" (including the "historical present") expresses what, from the speaker's point of view, is "factual immediacy." It explains the rhetorical use of the historical present in making a story "come alive."

The immediacy created by the "historical present" tense is, in my opinion, similar to the gerund that I am using.

The "gerund" (a problematic term) is basically the -ing form without "be." Like the so-called "present simple," the -ing form is also often mistakenly called the "present participle," even though it can be used to refer to the past ("she walked out the room smoking") and also "gnomically" ("Smoking is bad for you"). In my opinion, all uses of -ing in English (regardless of whether nominally, adverbially, adjectivally, or verbally) emphasise the dynamic quality of an action, understood as extended in time. In focussing on the dynamic quality of the action, especially when devoid of temporal markers such as the auxiliary "be", the action is made "dynamically immanent." Hence my (improved?) translation:

he founded it on the seas,
[indeed] establishing it on the rivers.

I add "indeed" in order to (1) eradicate any false sense of temporal succession between the cola and (2) because I get the feeling that the second colon "intensifies" the concepts found in the first (typical of parallelism; cf. R. Alter).

In sum: "establishes" or "establishing" (but not "established" or "was establishing") better gets at the dynamic of the verb form, though I still reckon that -ing is better. The historical present is usually used to tell stories, isn't it? Here there is no story, no narrative description of what happened. It is a vivid celebration of a single event in the past.
Posted by Phil Sumpter at 11:30

It seems then that you're throwing Niccacci's theory out the window. Correct?

No ... I just added the word "indeed" for the reasons mentioned in the post. I still like it. My point is that either way, whether one follows John or Alviero (Niccacci), the effect seems to be the same. Which I find odd and interesting (if I'm right, that is).

... In the correspondence column, misses conceptualises C.B. Stewart's letter as a whole, and clearly wishes to reply to it. ... misses clearly refers to an event in Past Time.

To my eyes (for whatever it's worth) this seems to miss the point. It does not seem to me to be a matter of immediacy, but of the letter as conceptualized as an enduring, and therefore still present reality; i.e. the letter is still sitting there, "saying" whatever it "says." Those who are familiar with academic writing often run into this phenomenon when interacting with deceased authors. Does one use the past (out of respect for the author's passing) or the present (in deference to their ongoing contribution to the debate in the form of their writings?

I agree with you. I found Lewis' explanation in this context a bit odd (I didn't have time to trawl the book for other explanations). But your description affirms what I've understood about his understanding of the "first form." It's about immediacy, making something vividly present for the listener, like when we tell stories in the "present historical" ("and then she goes into the shop ...").