Is the Murdered Chaldean Bishop a Hero? 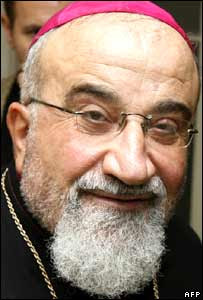 I'm not sure how to define one, but the New York Times' account of the recent murder of Paulos Faraj Rahho, Archbishop in Mosul, Iraq, has a detail that I find deeply moving.

Gunmen sprayed his car with bullets, killed two bodyguards and shoved the archbishop into the trunk of a car, the church officials said. In the darkness, he managed to pull out his cellphone and call the church, telling officials not to pay a ransom for his release, they said.

“He believed that this money would not be paid for good works and would be used for killing and more evil actions,” the officials said.

Apparently, the bishop had been shot in the leg. That he could still think of ransom money and the use to which it would be put, is a testimony to his character.

The article details the plight of Christians in Iraq:

In the last few years, Mosul has been a difficult place for Christians. The archbishop’s kidnapping followed a series of attacks in January on Christian churches. Last June, a priest and three companions were shot and killed in the archbishop’s church. In January 2005, Archbishop George Yasilious, of another church in Mosul, was kidnapped and later released. In October 2006, an Orthodox priest, Boulos Iskander, was beheaded after he was kidnapped and attempts to ransom him failed.

The number of Chaldeans in Iraq has dropped by at least a million since the end of Saddam Hussein’s dictatorship, though the Chaldeans are still the largest Christian group in the country. Priests have estimated that fewer than 500,000 remain in Iraq.

For a website dedicated to the plight of Iraqi Christians, go here.
Posted by Phil Sumpter at 10:03