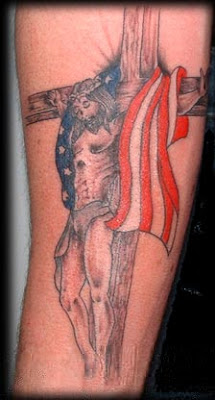 This could be seen as visual representation of Barack Obama's recent comments.
My first thought was , "Wow, I'm glad we don't have anything like this in England or Germany."
On second thoughts, however, though no longer in currency, England does have a religious-national myth with quite a long history behind it. According to Meic Pearse (whose book I reviewed here), this myth has consisted of three elements:

"a great Commonwealth - yes a great Federation - of all those speaking the same tongue [English]. ... And I suppose now we have got [sic] Palestine that this Federal House of Commons of the future will meet at Jerusalem, the capital of the lost Ten Tribes of Israel, whom we are without a doubt, for how otherwise could ever we have so prospered when we have had such idiots to guide us and rule us?" (105)

Thanks to Halden for the image.

great stuff. i am an american fighting against nationalism over here, we inherited from the Brits and it's messing up our country and the church.

on late night am radio, i used to pick up some strange preacher from Texas talking about england being settled by the lost tribes, weird stuff, I remember him using text from Isaiah to "prove" it

Crazy stuff. I'm glad you benefited from the post. This is obviously more of your area of expertise than mine. It's certainly important.

Thats nice all this religious talk and it just shows all of yous are blind to the fact that jesus has a skull for his midsection in the picture!

eToro is the ultimate forex trading platform for rookie and professional traders.