The Legacy of Xanth: an influential children's book 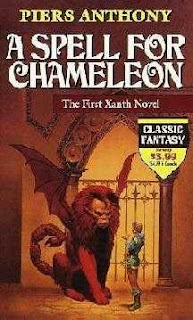 John Hobbins has recently started a blogathon dealing with children’s books that have influenced the way we see the world. These are the rules:

Each participant is expected to post on at least one children’s book (or series) that pointed him or her to some truth without which the world and what happens in it would be less transparent. Or perhaps the book simply taught you to ask the right questions. You get the idea.

I think the most important author for me was Piers Anthony, who wrote a science fiction series set in the magical land of Xanth. Xanth is a land of centaurs, dragons and basilisks, where every citizen has a special spell only he or she can cast. I had a vivid imagination and hunger for adventure, so this kind of multifarious reality provided me with ample food for inspiration. The way in which this land had its deepest effect on me, however, was not so much in the reading as in the enacting. I got together with a couple of other avid readers and we somehow managed to convince ourselves that this world actually existed, that one could access it if one had enough faith. Based on our star signs we were allotted an identity. As a Leo I turned out to be a griffin. I forget my particular magic capability, but we had plenty of adventures together, not so much running about reimagining the world in different terms as in closing our eyes and escaping into this alternative dimension of reality.

As time went by and we moved on (to be recently reunited 16 years later by Facebook!), “true reality” slowly got the better of me. I turned my interest to the concrete “imagined worlds” of other cultures and belief systems, which ended in a BA in cultural anthropology. Yet in hindsight I guess the feeling that I was part of something bigger, hidden from the grasp of my intellectual faculties, has never left me. I'm a Christian, so it is inevitable that I perceive reality as a place of intersection between heaven and earth. But given my doctoral studies in “canonical hermeneutics,” perhaps it is the legacy of Xanth that I should try to understand this reality in terms of Scripture's figural depiction of God, Israel and the world.
Posted by Phil Sumpter at 18:32

I wouldn't call Piers Anthony a children's writer. His stuff is a bit more racy....

I think he wrote two kinds of novels, one oriented to young people the other to adults. When I was 11 I saw a book of his in a bookshop. I took it off the shelf and started reading the first chapter. It was about a anorexic girl cutting herself on the toilet! I was so shocked and disgusted it actually made me pass out! That's the only time that's ever happened to me.

As a fan of fantasy fiction I have always looked at the Piers Anthony section of the book store but I have never actually read any. Your post has inspired me to think more seriously about picking him up. Blessings.

Well, I hope you enjoy them. It's been so long since I've read them that I can't say whether they are the best in quality, but they are certainly popular.