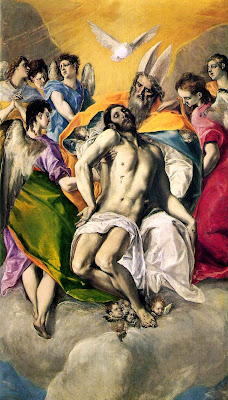 In my last post I pointed out that for Irenaeus the regula veritatis, or rule-of-truth, refers to the divine reality itself and not to any one formulation of it. These formulations are true to the degree that they mediate the reality to which they witness. The formulations may vary, but the truth remains stable.
But what is this truth? In other words, what is the gospel?
Irenaeus' own formulation mirrors very closely the Roman baptismal formula, which is explicated as faith in God the Father, Christ the Son,and the Holy Spirit:
God is the Father is unique, omnipotent, uncreated, eternal, invisible, only true, creator of heaven and earth and everything within—seen and unseen. He accomplished the creation through the Son and the Spirit. He is the father of Jesus Christ.
Christ is the Word of God, the Son, a man amongst men, visible, corporal in order to overcome death and reveal life, and to bring about peace and communion between God and man. He became flesh, was born of the Virgin, suffered under Pontius Pilatus, died and rose again and was received into Heaven. He will return in majesty in order to reconstitute everything, to redeem and to judge. He has saved us by his blood, has poured his the Spirit of his Father upon us in order to unite us to God. As true Man he summarises the image Adam within himself.
The Holy Spirit is the spirit of God, through whom everything was created. He preached the way of salvation (τας οικονομιας). In the fullness of time he was poured out upon mankind in order to create them anew for God. He is the mediator of the knowledge of the truth, indeed, he is truth itself.
To summarise: for Irenaeus the term regula veritatis does not primarily refer to the formula of the baptismal confession, neither to the books of holy scripture, nor to the ecclesial doctrinal tradition, but rather to the truth itself, i.e. the way of salvation as revealed by the Holy Spirit.
I should add that in this interesting interview with N.T. Wright, Wright makes a similar statement about the nature of the Gospel as a reference to a reality that is the case (Jesus is Lord) and not the process of salvation (justification by faith). To quote: "The problem with us Evangelicals is that we use the word "Gospel" to denote the system of how someone gets saved. I really want to emphasise this: we are not justified by believing in Justification by Faith, we are justified by believing in Jesus." Great point! Wright's presentation of the content of the gospel, however, is very Pauline, whereas I think Irenaeus has the entirety of Scripture in view. Perhaps that is the advantage of reading Paul in his canonical, and not just historical context. On this, see Childs' latest book.
Posted by Phil Sumpter at 11:36