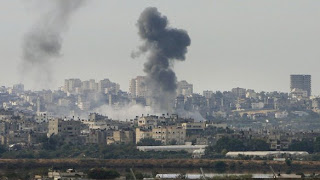 I've decided to post some of the main critiques made of Israel in its relations to Gaza by Avi Shlaim in his article How Israel brought Gaza to the brink of a humanitarian catastrophe. As I read it again I notice the rhetoric and a basic view of Hamas that I find naive. But then I'm hardly an expert on such matters. Nevertheless, he says much that is disturbing. Given the scope of the article, however, most of what is says is mere assertion. Though I love Israel, my love does not preclude my willingness to critique it. Yet, before I can do so, I need to get hold of the facts! And they are not easy to come by. If anyone has anything to say concerning the following points, or links to sources where I can get more information, I'd be grateful. Trying to figure out the situation is a full-time job, requring time that I unfortunately can hardly spare.
I've numbered the points for ease of reference:
1. The Israeli occupation of the West Bank and the Gaza Strip in the aftermath of the June 1967 war had very little to do with security and everything to do with territorial expansionism. The aim was to establish Greater Israel through permanent political, economic and military control over the Palestinian territories.
2. Gaza ... is not simply a case of economic under-development but a uniquely cruel case of deliberate de-development. ... The development of local industry was actively impeded so as to make it impossible for the Palestinians to end their subordination to Israel and to establish the economic underpinnings essential for real political independence.
3. In Gaza, the Jewish settlers numbered only 8,000 in 2005 compared with 1.4 million local residents. Yet the settlers controlled 25% of the territory, 40% of the arable land and the lion's share of the scarce water resources. Cheek by jowl with these foreign intruders, the majority of the local population lived in abject poverty and unimaginable misery. Eighty per cent of them still subsist on less than $2 a day.
4. In August 2005 ... Ariel Sharon staged a unilateral Israeli pullout from Gaza, withdrawing all 8,000 settlers and destroying the houses and farms they had left behind. ... To the world, Sharon presented the withdrawal from Gaza as a contribution to peace based on a two-state solution. But in the year after, another 12,000 Israelis settled on the West Bank, further reducing the scope for an independent Palestinian state.
5. The real purpose behind the move was to redraw unilaterally the borders of Greater Israel by incorporating the main settlement blocs on the West Bank to the state of Israel. Withdrawal from Gaza was thus not a prelude to a peace deal with the Palestinian Authority but a prelude to further Zionist expansion on the West Bank.
6. Israel's settlers were withdrawn but Israeli soldiers continued to control all access to the Gaza Strip by land, sea and air. Gaza was converted overnight into an open-air prison. From this point on, the Israeli air force enjoyed unrestricted freedom to drop bombs, to make sonic booms by flying low and breaking the sound barrier, and to terrorise the hapless inhabitants of this prison. [This seems to be confirmed by this documentary video].
[I should add that Kevin of biblicalia has kindly shared some thoughts on this article in the comment thread of my post, A hard pill to swallow.]
Posted by Phil Sumpter at 14:26

Email ThisBlogThis!Share to TwitterShare to FacebookShare to Pinterest
Labels: Palestine, State of Israel

I agree with all those facts listed. But we need to be very careful about the media; for how people video recorded the scene depends on whether they are left or rigth wing.