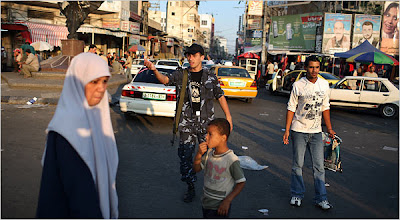 "Gaza has no throat.
Its pores are the ones that speak in sweat, blood, and fires.
Hence the enemy hates it to death and fears it to criminality, and tries to sink it into the sea... And hence its relatives and friends love it with a coyness that amounts to jealousy and fear at times, because Gaza is the brutal lesson …and the shining example for enemies and friends alike. Gaza is not the most beautiful city.
Its shore is not bluer than the shores of Arab cities.
Its oranges are not the most beautiful in the Mediterranean basin.
Gaza is not the richest city.
It is not the most elegant or the biggest, but it equals the history of an entire homeland, because it is more ugly, impoverished, miserable, and vicious in the eyes of enemies.
Because it is the most capable, among us, of disturbing the enemy’s mood and his comfort. Because it is his nightmare. Because it is mined with oranges; children without a childhood; old men without old age; and women without desires. Because of all this it is the most beautiful, the purest and richest among us and the one most worthy of love."

For a song sung by an Israeli and Palestinian, with a few thoughts of my own, go to my post In my heart.

[Hat tip: Laila, of Raising Yousuf and Noor: diary of a Palestinian Mother]
Posted by Phil Sumpter at 18:09