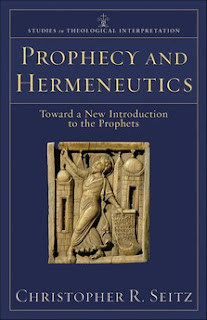 Many thanks to Baker Academic for providing me with a review copy of the extremely important book by Christopher Seitz: Prophecy and Hermeneutics: Toward a New Introduction to the Prophets (Grand Rapids: Baker Academic, 2007). As Childs has said in the blurb, Seitz is proposing a “profound paradigm shift”, offering “a magisterial overview of the entire field” and outlining “a new and brilliant hermeneutical synthesis of biblical prophecy that restores the centrality of the canonical Scriptures to the church.” Childs was not one to lavish praise without cause, so this review alone should be motivation enough to give it the attention it deserves.

SBL has also provided us with two book reviews, both of which give a fair enough summary of the outline and content, strengths and weakness, of Seitz's volume. However, I have one issue with both of them, namely, they haven't penetrated to what I consider to be the heart of the “canonical approach” (as Childs and Seitz understood it). Julia O'Brian's review touches on this in her final paragraph. She says,

In my judgment, speaking confessionally requires speaking explicitly confessionally, explaining and situating one’s theological convictions. For that reason, I longed for Seitz to name more specifically his understanding of the Christian faith and of the Bible, as well as how the final shape of the Prophets matters to both.

O'Brian has hit the nail on the head, and it will the the task of this thread to make make this dimension of Seitz's approach clear. At no point in his volume does Seitz make a programmatic presentation of his dogmatic assumptions and the way they shape his hermeneutic. As such, this thread will be more of an analysis than a review, in which I sift through the corpus of his essays in order to uncover the engine driving the whole. First, I will look at Seitz's understanding of the text's “substance,” which is God, who is both the living object and subject of Scripture's witness. I will then look at the particular form of the vehicle by means of which this God has elected to reveal himself. We will see that by starting with the substance of Scripture, our focus on its form and function will bring us full circle to the reality the evoked it in the first place.

The analysis will be divided according to three major subheadings:

2. Divine Reality (plus some examples)

3. The Witness: understood synchronically (and diachronically; along with the hermeneutical implications of both)

Jonah and the Nations: A Figural Reading

The Canonical Shape of the Twelve

The need for proportionality in exegesis

Proportional interpretation of the Twelve

The need for "Godly exegetical instincts": George A Smith as case study

Along the way I will be paying special attention to Seitz's vocabulary, as his own conceptuality can enable a deeper penetration of the reality Childs himself was struggling to describe.
Posted by Phil Sumpter at 15:48