Allegory and the problem of "history" 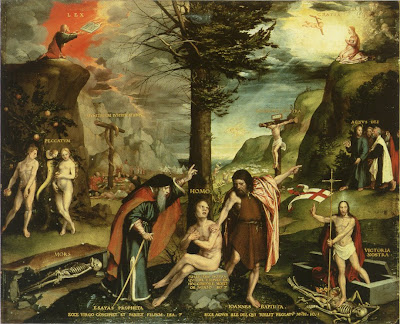 Tim of The Moving Image has posted the final part of his paper on the challenge of the modern concept of "history" to theological exegesis. His point is that modernity's understanding of the otherness of the past has disconnected us from it. The past is gone and can never be relived in the way it once was. The result is alienation from our Scripture, which is locked into another world, forever separated from the present. The "ontological immediacy," so to speak, once experienced by our forefathers, has been deconstructed by the recognition of temporal distance.

How can one "bridge the gap" in the modern era? Tim senses that the solution is "figural exegesis," and I agree. I think that the key lies in understanding the nature and function of figural exegesis within the "economy of God." Here are my comments on his post:

My understanding of the nature of figural exegesis is informed by my interaction with Childs. In short, Scripture has its true being within the eschatological economy of God. It is defined by its function within this economy, namely, to be a witness to "divine reality" (the text's res) and as such to draw God's people more into faithful, obedient relationship with him. The hermeneutical assumption of allegory, as opposed to midrash, as that the referent of the text is outside of the text. In short, the text is a "witness" to the divine reality and so it is the function of faithful (true) exegesis to "push through" the text, to "penetrate" it, so that one gets to the theological referent. The referent is greater than any of the parts and constitutes the unity of the whole (cf. Childs' "ontological unity of scripture"). Each witness, whether in the OT or the NT, is fragmentary, yet in faith we believe that the reality to which all the parts point is one. As such, we need to read the parts in the light of the whole: the trinity is referenced in the OT, for example, but from our latter day perspective we can see its reality in the OT (I tried to argue this in my post on The need for ontological categories in biblical exegesis). Childs calls this "moving from the subject matter back to the witness."

The key for bridging the past and present, then, is dogmatic. We see that all the parts of scripture ultimately point to a "different world" and so by inhabiting this world we sensitize ourselves to the "fit" between it and the parts, we can't help but hear the constant echoes. I would have thought that the key for bridging past and present would have something to do with the Trinity, the ordo salutis, and the rule of faith. This is not to ask us to jump into an alternative reality which ignores historical causality etc., it is to open us to a different dimension of this reality which intersects with it in complex ways (Childs calls it dialectical). The "glue" which joins the past and the present is apocalyptic and theological and we can't see it because, perhaps, in our quest for external, objective parameters for validating the results of interpretation we've lost the apocalyptic glasses to see what every believer at least intuitively knows has always been there. For Luther, allegorical exegesis was a reflex and he did it even when claiming to be reading "historically."

I have a feeling this all relates to Barth's theory of "the three times of the Word." A relevant essay on this is one by Seitz, which I referenced in my post on The theological crisis of biblical criticism.
Posted by Phil Sumpter at 11:56

I've erased a few different comments I was ready to make due to my head still processing (and the joyous amount of paperwork waiting on me in the office). I'll just leave it at letting you know that this post was helpful as I am working on presentations for a small class on Gen 1-11.

Thank you for your many posts which are often interesting and helpful. Also for the nudge to read through Childs again, as it has been a few years.

I'm always glad to hear my posts are of benefit to some! Feel free to comment as you like. Seeing others' reactions helps me understand better what I post myself.