Christian eschatology and historical methodology: the case of John 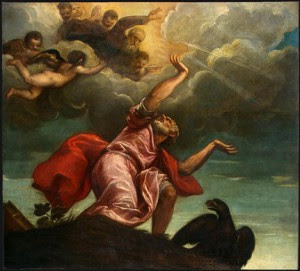 I have been posting a lot recently on the challenge that the content of Christian faith poses to traditional historiographical methodology, inspired mostly by Paul Minear's magisterial work, The Bible and the Historian (click for SBL review). I have now summarized these posts here. It is time that I padded out the theory with some concrete examples. The following is a series of quotes in which Minear looks at the ontology of John.

“This is an area where responsible historical study of New Testament eschatology is producing the greatest strain on methodology. It has made us aware that an eschatology radically at odds with the pristine Chrsitian faith is implicit in our modern historiography. This is not an issue that affects merely the location of the outermost boundary of the historical process. It affects both the perception of each event in history and the interpretation of that event. This is perhaps most obvious in the realm of conceptions of time. We have noted how a scientific hermeneutical method operates with a clear set of attitudes toward time. Any change in these attitudes will condition the application of the method everywhere. What happens, then, when we discover in the Bible attitudes toward time which not only claim to be true, but which also commend themselves to us with increasing power? The entire hermeneutical system is placed in question.” (54)

“The conception of endless, unilinear, one-way time must be modified if we are to accept the apostolic testimony. ... If the end has actually been inaugurated, then historical time is capable of embracing simultaneously both the old age and the new. No methodology whose presuppositions on time are limited to the old age will be adequate to cope with the historcicity of the new age or with the temporal collision between the two times” (55).

"The New Testament not only confesses the manifestation of eschatological realtiy within history in the form of an event, it also proclaims this event in terms of a person. ... Implicit in this eschatological confession is the demand to adopt a throughly Christocentric exegesis." (55)

"The substance of history itself becomes eschatological, existential, and personal." (56)

“How should we speak of an ultimate reality that conjoins the divine and the human? [John used a literary device, that is] by telling one story in such a way as to embrace many stories. But this is more than a literary device. It is a way of perceiving reality. He saw each story as fully historical, and yet as fully eschatological. ... He perceived each separate place and time in terms of its content, that corporate historical action that “filled it." He discerned behind this action a transhistorical model that linked each story to the others." (61)

"This is a comprehensive rather than a disjunctive mode of seeing and thinking. It apprehends events in terms of their inner structure as responses to God's action. ... Behind this mode of viewing was a distinctive ontological stance, to which we should give more attention that we usually do.” (63)

“I have been seeking to execute an historian's task of describing the pattern of thought charactersitic of the Apocalypse. As a theologian I believe this pattern to be relevant, though not necessarily normative, for current discussion of hermeneutics, ethics, ecclesiology, and ontology. As a ,oe of communication, the Apocalypse is an example of the radical interdependence of these four apsects of biblical thought, an interdependence too often absent from current thinking. I believe that as biblical shcoalrs we have a responsibility for making this interdependence as clear as we can. This sort of investigation of the ontological viewpoint of the Apocalypse should be extended to the other genres of literauture in order to obtain a more complete idea of the ontological perspective that is in some degree paradigmatic for the entire NT.” (68-69)

Start following our signals right now and gain up to 270% a day.