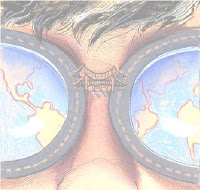 Chris Wright, in his fascinating book Old Testament Ethics for the People of God (about which I have written a book review), outlines Israel's "worldview" in his opening chapter.

He defines a worldview thus:

A worldview is a comprehensive set of assumptions that a person or culture makes in answer to several fundamental questions that face humans everywhere. (17)

The questions include the following:
Wright goes on to outline the "worldview of Israel in Old Testament times" (a phrase I find problematic):

Does that hold water? What do people think?

This may work as a distillate of the canonical scriptures in their final form, but I doubt many historical Israelites would have answered all these questions in the same way. Having said that, I'd like to think that their partial viewpoints at particular times in their history would have adumbrated something like this. This worldview (if that's the right word ...) is the product of the prophetic shaping of Israel's traditions, and as such is primarily a canonical/theological rather than a historical/sociological phenomenon. In this, Christ Wright differs from Tom Wright's use of the term. Hence my problem with the phrase "worldview of Israel in Old Testament times" (though Wright does qualify this in footnote 3).

P.S. This will be the subject of our Bible study this coming Thursday. Ich bin gespannt zu sehen was daraus wird!

P.P.S By some extraordinary coincident, Jon of The Theological Ramblings of an Ordinand has posted on the same issue today, seen from the angle of N.T. Wright (who really is a legend). He also links to an mp3 lecture by Chris Wright.

Seems like we have been looking at the same stuff today and have even used the same worldview picture.
www.ordinand.wordpress.com

Chris Wright/Tom Wright. both gifts to the Church

Bizarre! Thanks Jon. Your quotes remind me of the genius of the Bishop. He really is very holistic. I dig that. And I'm always up for audio material too!

i thought i was just losing my mind at first. I knew i had just read this.

i too find that phrase problematic. much like the more commonly held church saying, "in biblical times...".

thanks for the mp3 link.

Levi, do you think it's nevertheless a valid framework for interepting the diversity of the Old Testament?