A theological justification for Form Criticism 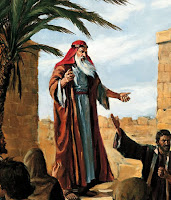 Confessional biblical scholars often give fascinating arguments to justify the use of historical criticism in the reading of the Bible. They come in various forms. Richard of יהוה מלך has posted the following interesting quote from Klaus Koch on the theological justification for the Form Critical method. It is clearly indebted to the dogmaticians Karl Barth and Hermann Diem and shares its outlook with that of von Rad:

The Old and New Testament claim to be the revelation of a god whose word and deed are fundamental to true human existence. For two milenia Christian theology has repeatedly reinterpreted this claim, checked it, and found it to be right. Form criticism provides the means for a more accurate interpretation and examination thatn has been possible before. If the thesis is right that form criticism culminates in a language history (literary history, transmission history) involving all manifestations of life then that claim cannot be justified by appealing merely to isolated texts, but to a complete history of all the biblical writings, to which each Old and New Testament book would contribute, and in which each would gain the recognition due to them, and this history would be carried further by church history. Within an overall historical framework of this kind it is possible to see why the early Christians (and Christians even now) recognise in Jesus the Christ. I do not believe that such a large historical enquiry will lead to our being less convinced than our fathers in the church were that Scripture is of God’s making and prompting. On the contrary, we have clearer grounds for sharing their conviction, for careful historical analysis enables us to see each stage of the biblical compilation as a living response to God (from The Growth of Biblical Tradition).

I think Brevard Childs would share a lot of these assumptions. God has established a kerygmatic witness to Himself in his prophets and apostles and so listening to this proclamation in all its details can surely be only helpful. This explains Childs' penchent for "tradition-historical trajectories," both inner-biblical and in post-biblical tradition.

But there is another dimension to this issue which I think Koch et al have left out, namely, the ontological. As I argued in my post The need for ontological categories for Biblical exegesis, there is a sense in which a grasp of the fuller reality of God reconfigures older testimony to Him. The Old really is "transformed" by the New (if that's the right word). And if it is the case that Christ "opens up" the Old in such a way as to show us its true heart, then shouldn't we allow the later hermeneutical shape of the canon to reconfigure whatever existed before, at an older tradition-historical level? To give some examples from the prophetic literature: a prophet's message is often expanded in scope by its placement in a new literary context, or it is metaphorically extended, or oracles are detached from their original historical moorings and given a new theological context, or traditions are edited in the light of the larger canon. All these manoeuvers have hermeneutical implications and a theological reading of Scripture that wants to grasp the fullness of its divine Subject must not only take the final form seriously as part of a trajectory, it must allow the final form to exercise a critical function in "re-calibrating" everything that went before.

This quote has inspired me to start a new thread looking at the various ways in which the prophetic literature in the OT was canonically shaped, as opposed to just tradition-historically extended. Stay tuned!

It is this conext, by the way, that Chris Tilling's recently posted Brueggemann quote should be evaluated

Thanks for the comments. I will respond but I need to digest what you have said. I've recently started a new job so my free-time has reduced dramatically.

the way you started this post raised my eyebrows, given your stance on Gese's method of doing biblical theology (I think I remember you correctly on this?). Also, the relationship between "language history" and "revelation" and "church history" seems pretty murky. What IS the locus of revelation here--an oral form of speech? a book collection confessed to be Scripture? An event, or sequence of events?

But your following quote ("To give some examples from the prophetic literature: a prophet's message is often . . . . All these manoeuvers have hermeneutical implications . . .") made my heart strangely warm :)

For some great examples, see the essays by R. E. Clements in Old Testament Prophecy: From Oracles to Canon.

all the best,
Michael

Hi Richard, no worries. I understand the time issue.

you're right that I am critical of tradition-historical approaches represented by Gese and Stuhlmacher. It's not that their individual theories are wrong, it's just that they don't take their approach to its logical conclusion. The final form is not just a cherry on the cake, it's a knife that cuts the cake and gives it its form (hey, I quite like that metaphor ... ). Where is the location of revelation? I'm still struggling to understand that myself. Childs was Barthian, so I've been reading Barth and Diem who talk of the "three times of the word." As far as I understand it, there's one concrete reality, which is the revelation itself independent of Scripture and tradition, but then there is the actualization of revelaiton by the Spirit within Scripture and tradition (or "preaching"). They all point to the one "substance," which is why Childs was so big on both tradition-history, final form, and reception history. Revelation is not a book of truths, it is a dynamic relationship between God and his people which is still going on. Does that ring true?

I've not read to much of Clements, but I have to confess that what I have read has been, well, boring. It feels like eating cardboard, especially when you compare his essay on prophecy and fulfilment with Childs' essay of the same name (for free on ATLAS). But I'll keep and eye out for the essays. They are no doubt important.