A most fascinating thread - and it's just beginning! 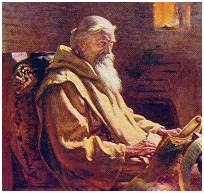 I have just read one of the most exciting things I've read for a while (second now to this), and it's a blog post. O.K., it's the first instalment of a paper held my Tim F. of the blog The Moving Image in which he begins to unravel the ontological and philosophical assumptions undergirding the modern concept of history. He grounds this in a comparison with the Venerable Bede, who seems to have viewed history a lot more along the lines of the New Testament authors, as I've pointed out in this thread. Perhaps I'm just weird, but this kind of thing really gets my heart racing. I'm loath to select quotes to post here as you really should read the whole thing and spend the next couple of days in bated breath waiting for the remainder of the paper (despite Tim's warnings in paragraph 1!). But as I fear those who read this will lack the enthusiasm I have for such things, though it really would do them good, I'll post two excerpts in order to try and wet your appetite:

As Constantin Fasolt notes, however, this fundamental separation of the past and present is a human making.[7] In his words, “We place that distinction [between past and present] into the uninterrupted flow of time. We assert ourselves and thereby we transform the world. We claim a place for ourselves in the here-and-now and hold it in opposition to the there-and-then. We draw a fence around a part of reality, call that the past, and mine it for the knowledge in which historians specialize. That is the founding act of history.”[8] Fasolt is describing our inability to distinguish a break between the past and present in our ordinary experience. To be sure, we can name my previous sentence as “past,” but the point is that we never experience an interruption in our experience of time. Everything occurs to us in a kind of simultaneous flowing present. It’s also important to note that sources are so important for historians, because they give evidence of what is gone and passed away, the mystery of what was, the past. In sum, by drawing a line in our experience of time and using sources to mark and reinforce this distinction, historians get their needed object of study, the past; and this past is separated from the present and should not be polluted by the present or the future; if it is, then we can accuse the practitioner of the history’s sin of sins. And most of us know that much of early Church exegesis and writing succumbs to this putative sin. If figural exegesis is ever going to be revived, even in a renewed or different way, we must reckon with the development and historical ban on anachronism.

As I’ve been alluding to historians who preceded modernity studied the past and made historical claims as well. But, it was conceived of quite differently. A reading of the Venerable Bede’s On the Reckoning of Time and his Ecclesiastical History, for example, displays his theological understanding of time and history. For example, the six ages of the world that Bede borrows from the preceding tradition “follows in all respects” the actual creation of the world according to Genesis.[9] In fact, the six world ages take place within the week of creation.[10]

The age we inhabit now is the sixth age, the age of the Lord and his Incarnation, which began with Christ’s incarnation and lasts through the persecution of the anti-Christ.[11] Chronicling the historical content of the sixth age, Bede narrates in detail generations and leaders of the West from Christ up to the 8th century English people.[12] This is significant because Bede does care about historical detail, as any cursory reading of his Ecclesiastical History reveals which is why many historians today respect him, while simultaneously and theologically placing the events in the larger arena of God’s providence in history understood in relation to Christ. Bede’s Ecclesiastical History (and all his historical writings) must read in this way for it to be properly understood.

I wonder if this provides a clue to what Barth was doing, which his colleagues found so perplexing? I do think Barth provides the bridge back to the lost world of allegory which we so desparately need.
I'll link to Tim's subsequent posts as they appear.
Posted by Phil Sumpter at 15:42

Wow, thanks for the heads up! This stuff sure gets my heart racing too.

Nice to know I'm not alone on this :)

It's the combined emphasis on the text as "witness" to a "res" that is opening up to me the possibilities of patristic exegesis. It may be a way of reuniting what orginally never separated: Word and Tradition.

Wow indeed! I'll be sure to read the rest. Thanks.

Thanks for the shout out here, Phil. I know it sounds kind of perfunctory to say, but I am in fact humbled by the excitement my work has generated for you and others. Again, don't expect too much as I am still feeling my way around this topic. However, I better get some confidence soon as this is what my disseration is about!

I look forward to hearing more. You're busting your brain in an area that I'm just in the process of discovering is deeply signficant for mine: theological hermeneutics. I often wonder whether I've got the ability to keep in mind all the contingenicies this complex area requires! I'm glad that the medium of blogging is making the task easier.