Photo of day: the superficiality of colour? 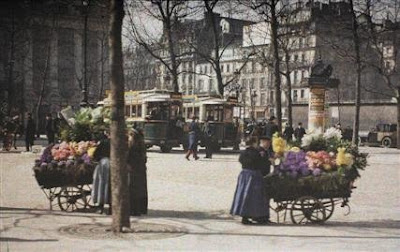 I found the following comment on the Léon Gimpel, the creator of this photograph, fascinating:

In 1904 Gimpel went to work for the French periodical L'Illustration, where he baceme the first reporter to make colour pictures on a regular basis. In 1907 it was Gimpel who organized the public seminar in Paris at which Louis Lumière presented the details of his newly developed autochrome colour process. Lumière's process turned out to be at least thirty years ahead of its time, since in 1907 it was thought that colour gave an unacceptable bias to reportage. Black and white dramatized events and made them susceptible to analysis, while colour made objects look opulent and encouraged people to focus on appearance rather than reality. Autochrome's suggestion was that we were luxurient materialists, and not the sort of people who could easily be mobilized on behalf of the national interest, or for any other abstract cause.

[HT to The Blue Lantern for the image]

Here's another gorgeous photo, portraying the absurdity of war: 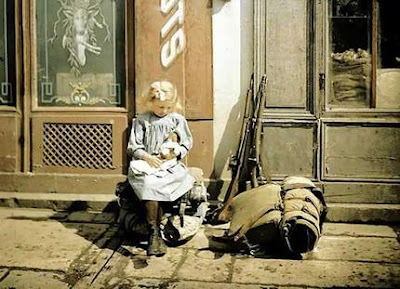 Email ThisBlogThis!Share to TwitterShare to FacebookShare to Pinterest
Labels: Photographs